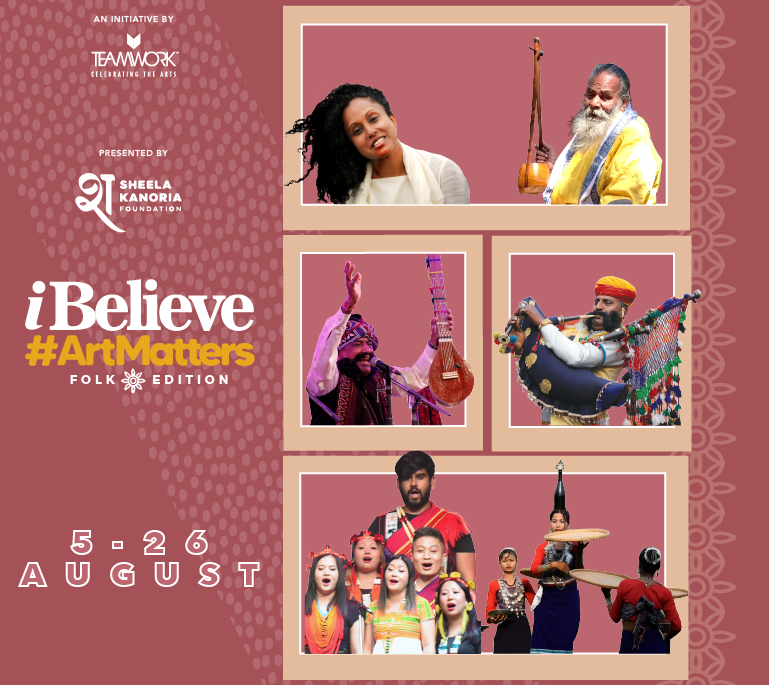 Rhythms of India by PaMaPaNiDa

India’s folk artistes have not only kept our traditional arts alive but have helped evolve and promote them across the country. This includes some of the greatest percussionists our country has produced, such as Nathu Lal Solanki, a Rajasthani maestro from Pushkar. Despite their acclaim, winning numerous awards, and representing India worldwide, our folk artistes continue to live under difficult circumstances, exacerbated by the Covid-19 pandemic.
Thus, for the second edition of I Believe Art Matters, we have commissioned Konnakol maestro B.C. Manjunath to compose a piece and bring together several acclaimed folk artistes across India and a couple of international artistes in what is sure to be an explosive pan-Indian collaboration showcasing our rhythmic traditions in all their glory.

Representing the fourth generation of musicians in his family, BC Manjunath has been practising the mridangam for the last 35 years. A Konnakol maestro, Manjunath has performed alongside music sensations like Pt. Ravi Shankar, Dr M. Balamuralikrishna, and K N Krishnamurthy, in more than 45 countries. He has been honoured with many prestigious awards, including the Ustad Bismillah Khan Yuva Puraskar, CMANA Award, Raag Laya Prabha Award, and many more.

One of the folk artistes that Manjunath will collaborate with is the legendary Nathu Lal Solanki. Hailing from the Pushkar Sangeet Gharana, he plays the nagada and also teaches this unique instrument to students of all ages at his school in Pushkar, Rajasthan. Solanki has performed with famous artistes such as Sivamani, Prem Joshua, Indian Ocean, Susheela Raman, and opened on the world stage for Radiohead.

S G Pramath Kiran is a distinguished percussionist from South India known for his traditional style of playing Indian Classical music with a blend of modern techniques. Pramath has collaborated with various world-renowned artists like Dr Balamuralikrishna, Mysore Nagraj, Dr Manjunath and Shankar Mahadevan. Founder of LAYATHARANGA, one of India's top world music bands featuring Indian and world percussion, Pramath has received the CMANA Award, ANANYA Award, and KIMA, to name a few.

Praveen Rao is a music director, composer, percussionist, and arranger, performing for over 30 years across India, Great Britain, Canada, and the USA. He has worked with international productions like Motherland, Story of C, Tears of Fire, and has scored music for award-winning Indian movies including Stumble, Singaravva & Namak ki Kankdi. He is the recipient of Aryabhatta Awards, Swaramandara Awards, Natya Sangeet Saraswati Award and many more.

Darshan Doshi is an Indian drummer, educator and composer, who is currently touring with Salim-Sulaiman, Farhan Akhtar, Diljit Dosanjh and Amit Trivedi. He started performing at the age of 2 and was featured in the Limca Books of Records as the youngest drummer of India in 1997. He has played the drums for several mainstream Bollywood films and performed with some of India’s leading composers, such as A R Rahman and Shankar-Ehsaan-Loy.