The Tale of a Rajasthani Bagpiper 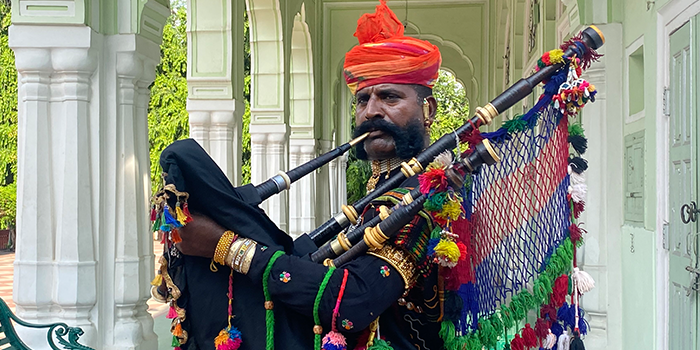 For I Believe Art Matters: Folk Edition, the phenomenal performer, Shyopat Julia, will narrate the inspiring tale of his journey with the mashak, an instrument that he has mastered over the years! The artist will talk about how this craft has been passed down from generation to generation, the art of playing it and the anand that he experiences during his astounding performances!

Shyopat Julia
Shyopat Julia is from the Rawla Mandi district, based in the state of Rajasthan, India, and has been learning the craft of the mashak since the age of 16. Describing it as a ‘Saas Ka Khel’, the tremendously talented artist carries forth the legacy of his grandfather and father, who also played the bagpipe. For him, the mashak holds a special place in his heart and he describes the experience of playing the instrument as pure ‘anand’ (bliss). He has performed several times at the iconic Jaipur Literature Festival and has also enchanted audiences in Mumbai, Bangalore, Tamil Nadu, Pune and Nagpur. His most cherished tune is Kesariya Balam, a song that continues to evoke the memory of Rajasthan in the hearts of music lovers around the world!