Toona: A Tribute to Bulleh Shah 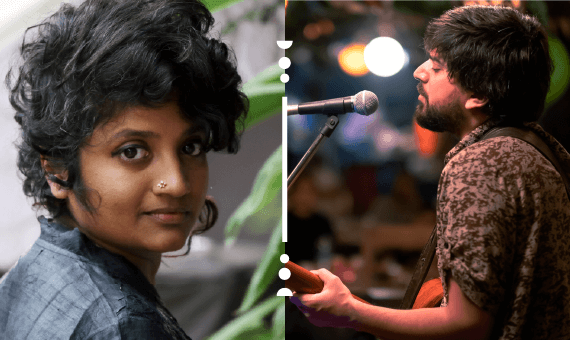 Bindhu Malini Narayaswamy, an eminent Carnatic classical singer from Bangalore, will collaborate on a new composition with Harpreet, a versatile artiste well known for his multilingual renditions of several folk songs and writings. This confluence of the southern classical tradition with northern folk music from two of India’s prominent independent musicians is emblematic of the spirit of collaboration at the core of I Believe #ArtMatters.

Bindhu Malini Narayanswamy is trained in both South and North Indian classical forms by eminent musicians and constantly strives to explore avenues outside of her strict classical roots in search of the pure soul-stirring power that music has. ‘Suno Bhai’, a collection of the famous poet Kabir’s songs, is her first music album created in collaboration with Vedanth Bharadwaj, formerly having worked together on Aruvi, a Tamil feature film. She has directed music for feature and documentary films in Tamil, Kannada and other languages, and also won the National Award and Filmfare Award for Best Singer, for the songs she created and sang in the film Nathicharami. Bindhumalini has expanded her craft, community and repertoire through collaborations like The Threshold, Khusrau Ke Rang, Akath Kahani and more.

Harpreet is a versatile artiste who sings original musical compositions in Hindi, as well as in regional Indian languages and dialects such as Punjabi, Bengali, Assamese, Rajasthani and Haryanvi. Harpreet has gained critical acclaim for his light classical style of singing. His creative talent fuses both the modern and traditional when composing tunes to his own lyrics and for classical poetry that he loves. He is best known for creating musical scores to epic works of humanist poets like Kabir and Bulleh Shah. Credited for taking celebrated poets to the masses, Harpreet has also composed popular hummable tunes to words of poets such as Pash (Avtar Singh Sandhu), Faiz Ahmad Faiz and Nirala (Suryakant Tripathi). On his musical journey with poetry, he delivered a TEDx talk in Jaipur in 2016.